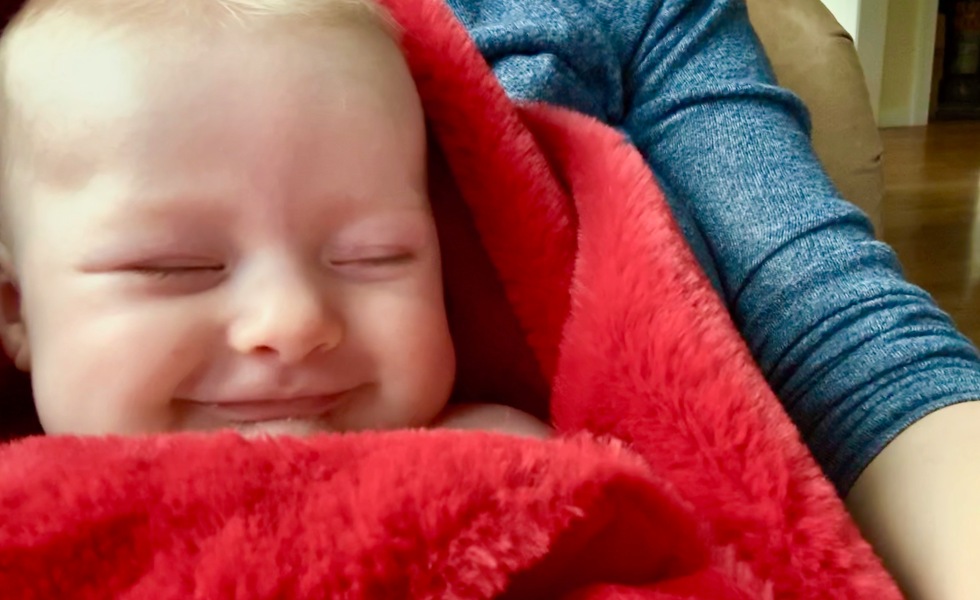 At least a few times a week, I will look at Lucy and say, “I can’t believe I pushed you out of my body.” She’ll smile at me and drool all over herself. I say, “No, really, you were in my belly and I pushed you out. How did I do that?” Her little face lights up with laughter. Yeah, real funny Lucy. 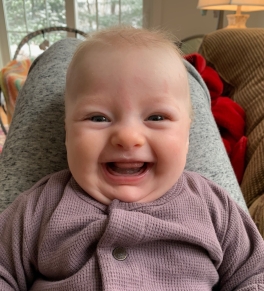 How did I do it? I pushed really hard and a baby came out. Sounds simple. I didn’t have much of a chance to process what I did since Lucy decided to scare the crap out of us 2 days after she was born. We were thrown into a tornado of terror and uncertainty. Then, suddenly, we were sent home with this tiny creature and told she’d be okay.

Childbirth is seriously amazing and sort of terrifying…okay really terrifying. Don’t worry, I won’t go into gory details. If you want specifics, shoot me a message. And I’m not trying to scare anyone out of doing it. It is terrifying, but it’s such a miracle. It’s a miracle that this tiny life form is pushed out of a bigger life form and the whole process goes right as often as it does. It’s a miracle that a woman can conjure up enough strength required to birth a child. I never believed I was that strong. Now, after doing that, I feel as though I am capable of doing anything.

I didn’t cry through the induction process and most of early labor. I expected myself to be a crazy mess, but I was smiling and making jokes with Zach most of the time…probably because of the epidural. 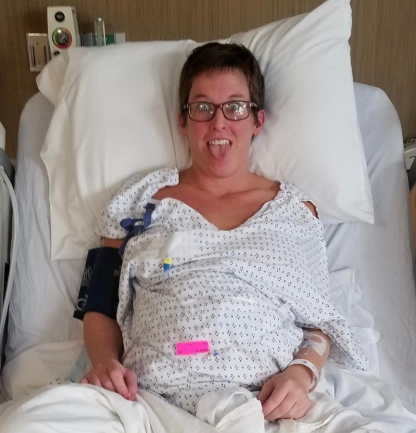 But, when the doctor came in and said I would be pushing soon, I lost it. I had this uncontrollable urge to cry. Through the tears I said to Zach and my mom I hoped that nothing would go wrong. I said I wasn’t sure if I was strong enough to do it. I feared I would be bad at being a mom. I apologized for crying. They both consoled me and said I was being silly. They reassured me that I would do this and I would be a great mom.

When I began to push, the fear went away. The doubts disappeared. I did what I had to do. I pushed my baby out. When they handed her to me, I felt a contentment that I never felt before. I wasn’t afraid. I wasn’t unsure. I felt a courage and confidence that I had never had until that moment. It’s like a switch was flipped on. The mom switch. Lucy was my baby and from that moment on I would do anything and everything to ensure she was going to have a wonderful life.

It’s true that right after you have the baby, the pain and insanity of the moment melt away. When you see the face of the little human you and your partner created, everything else becomes irrelevant. All you can focus on is the prize you got after the most physically taxing moment of your life.

Since my last blog post, I have had more of a chance to think about the childbirth process and formulate an articulate response:

OH MY GOD THAT WAS THE MOST INSANE THING I HAVE EVER DONE. I PUSHED A SMALL HUMAN OUT OF MY BODY AND NOW I AM WALKING AROUND FEELING FINE LIKE NOTHING EVER HAPPENED … AND DARE I SAY, I’D DO IT AGAIN?!

It was seriously awesome and the respect I have for my body, the female gender, and life itself has increased by a million. And even though it was super intense and wild, I would totally do it again. I think there is a thing to these hormones. God put hormones into the mix to make women crazy enough to want to do this again and again. These hormones are no joke. THERE ARE SO MANY FEELINGS. I miss being pregnant sometimes. Is that crazy? I miss that feeling of a life growing inside of me. There’s nothing like it. I think the hormones give you like a life high or something. You get on hooked on creating life.

They say your body should be mostly back to normal within 6-8 weeks after you deliver. Which is true, your body does get back to its essential inner workings pretty quickly, but it is forever changed. When you have a baby, you are not only learning how to take care of this new human, but also how to take care of the new you. You get a new baby, a new body, and a new soul.

I feel like my soul has changed. Both Zach and I fee l that way. We feel enriched. We feel a new kind of happiness. Lucy has helped us level up in this game of life.

In retrospect, the first few weeks we had her home were kinda nuts. She slept a lot during the day and spent her nights waking up every 1-2 hours. One of my brothers said to me, being up with the baby in the middle of the night is really special. I thought that was an insane statement at first, but over time I have found that he was right. He said, “the middle of the night feeds are the best. It’s just you and the baby, nobody else.” No matter how tired I feel, I revel in the time I get to spend with Lucy feeding her in the quiet of the wee hours of the morning. She is typically pleasant in the middle of the night, which makes it easier. She often goes right back to sleep after eating. There of course have been nights when she is wide awake after eating. I get frustrated and find myself saying, “Oh, God, come on Lucy, just go back to sleep, please.” Zach will come in and ask if I need help and I’ll snap back at him, “Just go back to sleep!” It happens! It’s hard, but the key is to remain a united front with your partner. It can be a struggle figuring out whatever the issue is. It’s the worst when we look at her when she is crying and she looks right at us as if she is saying, “What are you going to do about this?! Help me! Figure this out!”

I have found she seems to be a baby who only cries when something is really bothering her. She doesn’t cry just to cry. I feel like some babies cry just because they can. Once we figure out what’s making her uncomfortable, she calms down right away. I have been getting better at determining what it is she needs. I have intuition, who knew.

That intuition came in handy. In the beginning of January, she gave us another scare. She had high fevers off and on for over a week. We took her to the doctor and they said it was probably a virus because she had a runny nose. I felt like there was something else going on with her. The runny nose and congestion weren’t convincing to me. The fever continued, but the runny nose did not. Off to CHOP ER we went.

We learned that there are two possibilities when a baby under 3 months presents with high fevers: a viral infection or a urinary tract infection. Of course, with Lucy’s luck, it was a UTI. She spent two nights in CHOP so she could get IV antibiotics to get rid of the infection. She was smiling through the whole ordeal. Classic Lucy.

Zach and I stayed there overnight and as we walked through the hospital to the cafeteria, we were reminded of her first few days of life. We felt blessed that all she had this time was a UTI. We navigated the halls like we owned the place. Hopefully, we won’t have to stay over night there anytime soon, if ever again. The sleeping arrangements can be rough. 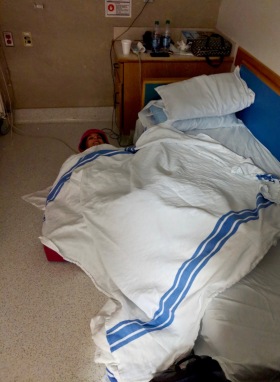 That was an awful week. Her fever got up to 103 one night. She would scream and scream and we didn’t know what was going on. She only wanted to be held. Poor girl was a hot mess.

She has been fine since we figured it out. She has a urinary reflux issue on one side. Vesicoureteral reflux to be exact. I had the same thing when I was young and I grew out of it, but I never had symptoms. She looks like her father, but she got my urinary tract. My bad, Lucy.

I didn’t find out I had it until I was 29 when I discovered my blood pressure was high. My high BP is a result of the years of reflux going untreated. At least we discovered it and can be on top of it. The doctor said it’s something she will grow out of and requires no intervention at this time. All we need to do is monitor her and keep her on a medicine to prevent further infection for now. Lucy gets lucky again.

It’s shocking Lucy has only been with us for just over three months. It feels like years. My assessment on parenting at 3 months in: parenting is hard work, but it’s fulfilling. It’s exciting and scary and beautiful. Every day is an adventure with Lucy. It’s a pleasure and a blessing to be able to experience the miracle of life through her. The blow out diapers, the spit up, the middle of the night feeds, the occasional screaming fit, the hospital visits, it’s all worth it.

The other night we had gone out and Zach’s sister and brother-in-law had watched her. When we got home, they said she was very upset for a good part of the night. As soon as she saw us, she lit up. After they left, we sat with her. She laid on my chest and held her head up. She had a smirk on her face. Her little hand was resting on my chin. The stare she had was one of overwhelming love and admiration. She was lost in my face. She turned to Zach and gave him the same look. Back and forth her little head would go. She couldn’t get enough of us. She was the happiest, most content person in that moment. To be able to provide such an intense level of love, comfort, and safety to a tiny person is so gratifying. It was a simple moment, but it was one of the most beautiful moments we have had with her so far. Knowing that we can provide this type of happiness for her makes everything worthwhile.

And, just for the record, after reflecting and working on this post for a few days, I still don’t understand how I gave birth.