This past Tuesday, our lease ended on our apartment on 19th street. I remember when we first toured the place. We looked at each other when we left and we knew it was where we wanted to be. We walked back to Zach’s apartment on Arch Street discussing our other options, making sure it was a good decision. When we arrived at his place, the landlord called and said someone else was interested, but if we agreed to sign a two-year lease, the place was ours.

Wow, two years. It sounded like a long time. One of our original plans was to sign on for a place for a year and if we liked it keep it going. Signing on for two years up front seemed like an eternity. I can remember Zach looking at me and asking if we should do it. The start of many big decisions we would make in our relationship.

It was our first place together, our first home as a married couple. The night of our wedding, we stayed at the Union League, so our first night at the apartment as a married couple was the day after we got married. We walked back from the Union League, our wedding gear in duffel bags. We walked up the steps and opened the main door. Zach turned to me and said, “I have to carry you over the threshold!” I of course responded, “I hope you can lift me.”

He carried me through the first door, up the few stairs to our entrance. We opened the door to infinite possibilities. I remember the surge of excitement we both felt. This was OUR place, our 1,100 square foot palace, our first big financial responsibility we would share together. We felt so grown up, so accomplished, so confident that this was where we were meant to start our marriage. The first thing we did was play a few games of Super Smash Brothers to christen the apartment. Obviously, that’s how you properly start a marriage. Zach won, I am ashamed to admit.

That first weekend set a tone for all the fun we would have at our new place. We went out with friends that Saturday night and stayed up late. Sunday we watched the Eagles play the Patriots and the Eagles won. Again, I reiterate the infinite possibilities. Living downtown was a dream come true. I often told Zach when we were dating that I’d love to spend a few years living in center city. When we got engaged, it was a no brainer that we would rent an apartment down there. Zach had already lived various locations and was well acquainted with all the best spots.

One of my favorite things was being able to walk everywhere. We’d walk to the grocery store together a few blocks away. We walked to bars, restaurants. We walked to meet up with other friends who lived nearby. Zach walked to work. We rarely needed the car, which was a change for me. Sometimes if I was out for a run while Zach was walking home from work I’d ask him which route he was taking so I could “run into him.” We’d run together to the trail that was just a few blocks away. The late nights walking home together after being out with friends were some of my favorites, laughing together at how silly we were and feeling like we had no limits on time and that the city belonged to us. It was our playground.

There’s a bar on 19th and Chestnut called Drinker’s that became our go to spot for tacos. We started going there on Wednesdays, because apparently we are too cool to eat tacos on Tuesdays like everybody else. Their tacos aren’t even THAT great, but we love them anyway. The waitress who worked on Wednesdays started to know us. She’d wave us down as we walked in and always made sure to be our server.

Cherry Street Tavern on 22nd and Cherry was our favorite spot to go. Zach introduced me to that place when we started dating. Walking in there is like Cheers, everybody knows our name. We’ve spent many times in there with countless friends listening to countless songs on Touch Tunes. Touch Tunes is an app that allows you to connect to the jukebox in a bar through your phone. I’m certain we have spent a small fortune on Touch Tunes. After we got married, there were a few times Zach and I were there by ourselves and he’d play our wedding song Hooked on a Feeling. We’d get up and dance together in the middle of the bar. Another favorite spot was Bar bar. Yes, a bar simply called Bar. I love it because they have a bubble hockey game there and it’s one of the few games Zach isn’t very good at.

One weekend recently, Zach discovered Uber Eats and we had McDonald’s delivered to us for a late night snack. You would have thought we discovered an unknown land. We relished in the late night burgers and watched Rick and Morty while we indulged.

Our place had a roof deck too where we spent many nights grilling, hosted family members and friends, drank mimosas while listening to music on a summer day. We hung out with our neighbors a few times, getting to know the “dudes who live above us.” It was a spot we could sit and watch the sunset, side by side, just me and my husband, and the beauty of the city sunset.

Yes, we have had our fun, a lot of fun. It is well known that Zach and Kate know how to have a good time together. But this apartment is also a symbol of our growth, both as a couple and as individuals. It’s a place we have learned how to live together. As I mentioned in a previous post, we didn’t live together until we got married. It’s been fun getting to know each other’s quirks better and how we operate being with each other most of the time. It was a rather easy transition thankfully. No major faux pas.

This place taught us how to be more open with each other. If we had a disagreement or we were upset over something, we couldn’t just leave and go home. We were home. We had to be open about whatever it was that was making us upset. I can remember when we were dating, if I got mad at Zach for something or vice versa when we were hanging out, we could deal with it later. Or if we were texting, I could put the phone away and think about it on my own. When you live together, you can’t do that. Sure you can go out and let off steam, but when you go home, the person is there waiting for you to express your feelings.

This past year has been a pivotal one in our relationship and we experienced it in this apartment. As the time of moving out came closer, I thought to myself I am so ready to get out of this place. I hate the things that have happened the last eight months here. As I reflect on it now, I feel badly that I thought that. I got caught up in my grief and I took it out on our apartment. The apartment didn’t cause our strife. If anything, it was a safe, comforting environment where we could be comfortable to talk to each other, really talk to each other. We have shared so much within those walls; love, laughter, and hurt. As much as there were nights of non-stop fun, there were also nights of sadness and stress. There were nights I cried in Zach’s arms and then again there were nights we both cried from laughing too much.

I will always remember our 19th street palace fondly. The ups and downs we experienced there have been a positive in our relationship. I am so grateful for our time in the city.

I’ve gone on about what this place meant to us but I have failed to mention where we will be living. Well, that’s a whole other blog post. I’ll give you a quick summary. Right now, we are staying at my parents’ house because we are waiting to close on a house! Yes, a house of our own. A four bedroom, 2.5 bathroom house. A new palace for us to make our own. There will be more to come once we settle everything with it.

Here’s a teaser, we became interested in this house in January. We put in a bid in February. It’s a called a “short sale.” My suggestion is they (whoever they are that make up names for these sales) should change it to an ETERNITY SALE. It’s September right now, in case you all forgot. Yup, it’s September and we are still waiting. I’m totally not stressed over it. Nah, not at all. Totally okay with it. Ask Zach.

So dear readers, join me and Zach and as we say farewell to our 19th street palace. Join us as we take yet another step in our life long relationship. Help us say hello to our future home…hopefully….sooner rather than later…..love my parents dearly but we can’t live with them forever…….sorry mom. 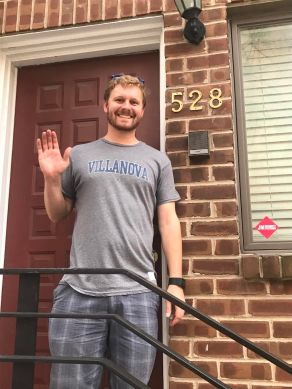