LIFE IS CHANGING ON ME AGAIN.

I am very excited, overwhelmed, a bit emotional, but overall pretty psyched. Did I get across that I’m excited? So my big brother, it’s always so funny saying that because I have more than one, so I’m sure you’re thinking okay, say it, which brother?!

Another Sprandio boy, well I guess he’s a man not a boy, is taking the plunge. My third oldest brother is engaged. It’s pretty awesome. He’s been with his girlfriend for a while now. They’re a great match. I can believe this is happening, but at the same time I can’t believe it. My second oldest brother just got married in July! My boys are leaving me so quickly. Yikes, I sound like my mom. My mom got pretty emotional at my oldest brother’s wedding and at my second brother’s wedding. Obviously, she’s a mom. But I never realized how emotional it would be for me. Yes, we’re back to me, because THIS IS ALL ABOUT ME. It’s hard for a little sister to see her big brothers move on and start their lives. Especially for someone like me who struggles with change sometimes.

I remember when my oldest brother got married. I was only 20 at the time. I didn’t really know what love meant and I certainly wasn’t looking for it. I thought love was when someone opened the door for me or bought me dinner. I was a senseless 20 year old college sophomore. The night before the wedding is when it all sunk in. We all stayed at my mom’s house. I remember sitting in the living room together and we talked about life, about growing up, about what it was going to be like from then on, not too much different because Sprandios don’t stray far from the nest, but still different. He told us how much he loved all of us and how he was so happy about starting a new life with his wife, but how he would always be there for us and he would always include us in his new life. I cried a good bit that night. I saw my big brother in a completely different light. He was a grown up. It was such an interesting feeling for me as a younger sibling. Seeing him with his wife solidified for me what it meant to be in love. You could tell they were crazy about each other just by the way they looked into each other’s eyes, the way they held hands. Magic.

Then five years later, my second big brother decided to take the plunge. We did the same thing the night before his wedding. We all sat around together in my mom’s living room and talked about the same things as before. I cried a bit, of course. Seeing him with his wife, again, solidified for me what love really was. Magic again. And I was older this time around, 25. I was more mature, I think at least. It meant a little more to me I think because I’m at that age that people start taking these steps. And this sister-in-law is only two months older than me. So I think I cried some different tears this time…quarter-life crisis tears. OMG I’M AT THE AGE THAT PEOPLE ARE GETTING MARRIED!! WHAT?!I CAN’T EVEN IRON A SHIRT PROPERLY!! It was hard to let him go though because this brother was my roommate. I lived with him in our own place for over a year. We had gotten close, so it was a different feeling than watching my oldest brother get married. I’m close with all of my brothers, but I have a different connection with each one. I lost a roommate. Good thing I have a younger brother. He filled the void that the big one left.

Seeing each brother at the altar watching their brides walk down the aisle was really amazing. In that movie 27 Dresses, the one character says he looks at the groom because his favorite part of a wedding is watching the groom’s reaction to the bride walking down the aisle. If you haven’t done that, I suggest you do at the next wedding you go to. Look at that groom’s face. You’ll cry, believe me. Even if you aren’t related to the groom YOU WILL CRY. And if you’re a bride getting married, stare at your groom. He’s def crying and then you will cry and your make-up will smear.

Looking at my brothers up there, they weren’t just my big brothers at that moment, they were men, grown up men, husbands. It’s super strange to see someone who used to (and still does) tease you and tell you that all you do is fart and poop as a grown up. But those were the moments that it really hit me that my brothers were no longer my boys.

Once again I am a bridesmaid, so I get to stand up there and send off another brother. It really is nice for them to include me. I do appreciate it, even though I joke about how I expect it to happen. I mean, I am the only sister 😉

So I’m going to spend the next ten months preparing myself to lose another brother. I know, I know, I’m not really losing a brother, I’m gaining a sister. When I was growing up, I always wished for a sister and now I’m going to have three. Pretty cool. I am very proud and happy for all of my brothers. They have accomplished so much in their lives and they all have been lucky enough to find people who love them. I thank all of them for providing me and my younger brother with such good examples of what happy loving relationships are. And the girls know if they aren’t good to my boys they’ll have to deal with me! I may seem nice, but I’m like the hulk….you won’t like me when I’m angry. Ha, that was the funniest joke I ever told.

It’s amazing how differently you see your siblings as you grow up. My brothers really have taught me many lessons about life and they don’t even realizing their doing it. Thanks guys.

So here’s to the already wed and the soon to be wed. Welcome to the family sister #3! 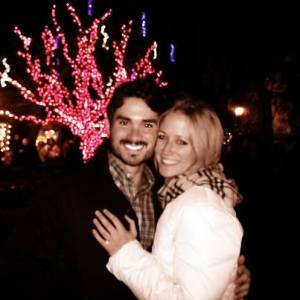 The soon to be wed on the night they got engaged!

← THANK YOU
Back to regular programming/New nephew →

1 Comments on “Here we go again”